The activities listed below have been co-financed by the European Regional Development Fund and the provinces of Groningen, Fryslân and Drenthe.

Installation: for renovations and new buildings

Not only can the innovative QuakeShield system be applied in new properties, but it is also very suitable for renovations. For example, we have reinforced a farm in the Groningen village of Usquert on the inside. The structure was entirely ramshackle. This enabled us to make an essential contribution to the preservation of characteristic villages in Groningen.

Unlike in the case of concrete structures – which we reinforce externally with carbon strips – we apply strips internally for brickwork. This way, both sides of the wall are reinforced in terms of tensile force, and the wall will be able to resist a greater load.

Finally, a carbon mesh is placed on the wall, which is sealed with a fibreglass-reinforced polymer mortar. This results in improved cohesion between the bricks. 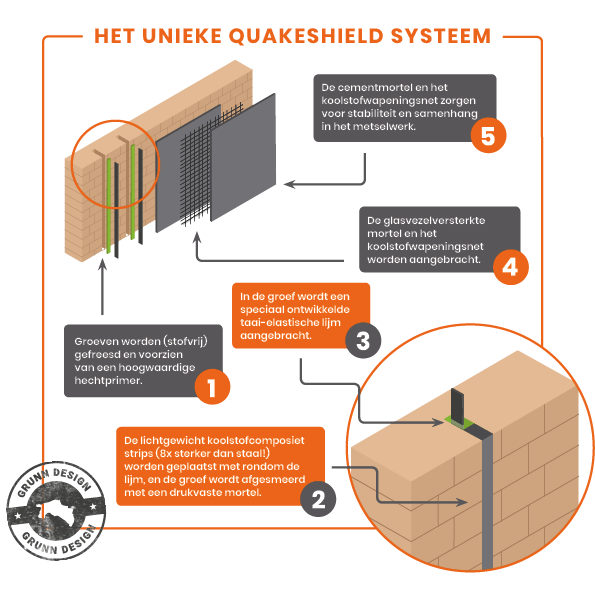 Do you need help?

Please contact our customer service team if you have any questions.
We are here to help you.

Martin van der Leest (SealteQ) and Peter Westra (Koninklijke Oosterhof Holman) take pride in the fact that their cooperation has resulted in the first validated reinforcement method for properties in the Groningen quake area: the reinforcement method works and has proven itself in practice. Thus, the product complies with the strict requirements the designers have imposed on themselves. They have conducted many tests, and the product is currently even part of promotional research by our PhD student Ömer Türkmen

The sharing of knowledge led to QuakeShield

The project was first conceived when the designers got into the car on their way to see professor Jan Rots from TU Delft. Test benches were built, contacts were established with TU Eindhoven, and international explorations were made. In other words, it was this sharing of knowledge led to QuakeShield. In order to embed the knowledge in the region, the test benches were transferred to the innovation centre for the construction sector BuildinG (Build in Groningen).

Designed in Groningen with international appeal

QuakeShield is well established after only three years of solid research. For example, we were asked to speak at the international masonry conference at Padova in Italy, and at the Australian Masonry Conference in Sydney.

Copyright 2022 - Quakeshield.com | All rights reserved
Back To Top
×